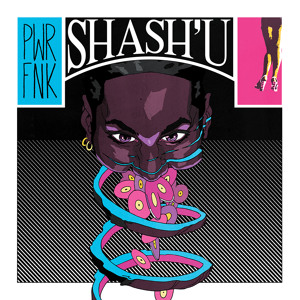 Montreal beat king Shash’U kicked off 2015 with his debut Fool’s Gold EP Thru Da Night, launching his inventive, muscular take on dance music worldwide, and racking up props from underground peers like Kaytranada, gatekeepers at MTV and BBC Radio, and sweaty fans around the globe in the process.
Most producers would be content to repeat a successful formula on their follow-up release, but on the new PWRFNK EP, Shash’U blows up his own playbook entirely, blazing forward with a wildly self-assured sound that slaps futuristic, heavy bass over ’80s-inspired electro grooves worthy of Axel F. Grab a taste for yourself with the heavy breathing bump of “PXXXY,” and stay tuned for the full nine-track PWRFNK EP out 3/31 on Fool’s Gold (along with a limited edition, deluxe vinyl edition collecting Thru Da Night and PWRFNK on two 12″s along with a fold-out poster of the wraparound sleeve art by acclaimed illustrator Ron Wimberly).